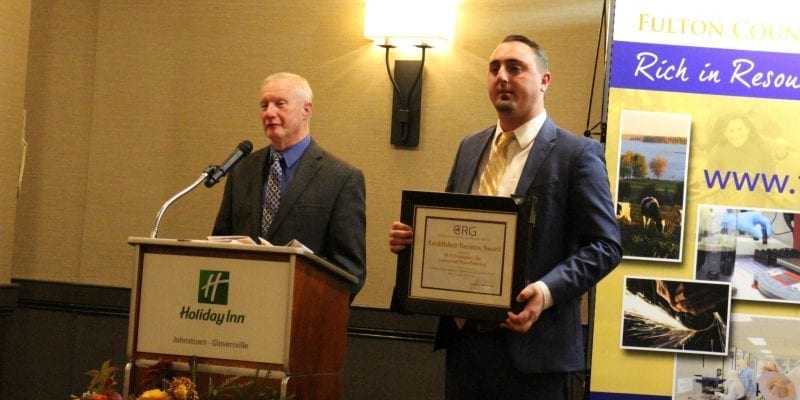 JOHNSTOWN — Five area businesses were highlighted Friday in a “celebration of Fulton County’s ingenuity, success and commitment to the local economy.”
The Fulton County Center for Regional Growth held its second annual Fall Gala on Nov. 16 at the Holiday Inn Johnstown.

FCCRG President Ron Peters opened by noting that the FCCRG serves as a “key resource” by bringing together and creating initiatives to facilitate economic development for businesses and industry within the county.
“Last year I said that we brought businesses together, owners, local leaders, and national experts to showcase the county in a way unseen before,” Peters said. “In 2018, we continued to do that and it’s paying off. We worked with the county to look beyond our own backyard to compete both globally and create new alliances.
“On a local level we deepened our focus on downtowns, creating employment ships and opening dialog with key stakeholders,” Peters continued. “The work CRG does in partnership with regional leaders makes Fulton County an exciting place with a very great, bright future.”

Peters justified the projection by highlighting the accomplishments of the FCCRG and the business community over the past few years. He noted that the county’s industrial parks are nearly full capacity and that there is a need for more “shovel ready sites” that it will work to identify moving forward. He also pointed to more than a dozen small businesses and dozens of jobs created by the Microenterprise Grant Program.

Assemblyman Marc Butler attended the event and was invited to speak following Peters’ introduction. Butler referred to Gov. Andrew Cuomo, noting he was about to say something people wouldn’t normally expect.

Meet the Team Get in touch